Winner of various national and international awards, Marco Vinicio Carnicelli has performed concerts in many Italian and foreign cities, both as soloist and with symphony orchestras, receiving excellent reviews. After his graduation from the Conservatory of Bari, he continued his musical studies with the great Venezuelan guitarist Alirio Diaz and the orchestra conductor M° Sergiu Celibidache.

He premiered the Guitar Concert by the English composer Lennox Berkeley in Italy in 2009 and in Mexico in 2010, with Nicola Giuliani conducting the Orchestra Sinfonica di Bari, the Orquesta Sinfonica de Toluca, and the Orquesta Sinfonica de Guanajuato. In 2012, he recorded a CD that includes transcriptions from the Concierto de Aranjuez by J. Rodrigo and the Concerto by M. Castelnuovo-Tedesco, in the duo version for guitar and piano (Waveahead label, broadcasted by Radio National Rai 3 - new recordings).

A new CD is in preparation with musical works by M.M. Ponce and L. Berkeley for guitar and piano as well as a CD with music for solo guitar by Walton, Villa-lobos, Brouwer and Lauro. Currently he holds a Chair of Guitar at the N. Piccinni Conservatory of Bari.
Back Jury 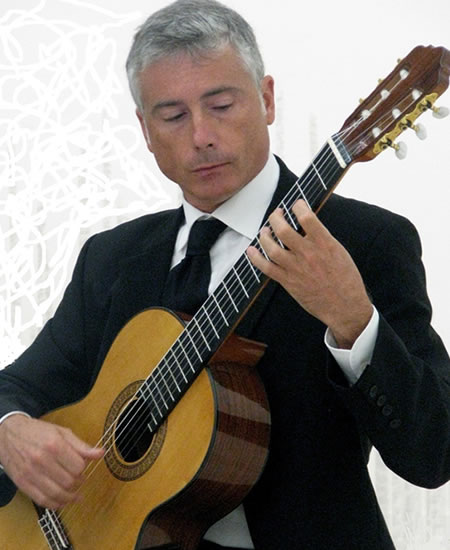